On May 31st, 5 accused students won acquittal at the first trial on Tokyo district court! We at last overcame the political crackdown by “Law concerning Punishment of Physical Violence and Others”- infamous old law to suppress labor movement and student movement.

We thank you from the bottom of our heart for your support and solidarity with the struggle of Hosei University!

(The following is a briefing from a blog of “The Federation of Cultural Clubs of Hosei University” http://08bunren.blog25.fc2.com/)

This crackdown is particularly vicious and aberrant in lots of them against Hosei struggle since March 14th, 2006. The aim of state power was to break down Hosei struggle and solidarity between Zengakuren and The Federation of Cultural Clubs by unjust arrest and domiciliary search all across the country. In 2009, 11 students had arrested and spent 23days in police stations. Moreover, ODA Yosuke, ONDA Ryo, UTSUMI Yuichi, ARAI Taku, MASUI Makoto were prosecuted by trial counsel. They were the leaders of student movement of Hosei and Zengakuren (All-Japan Federation of Students’ Autonomous Bodies).

However conviction rate of criminal court in Japan goes over 99.9%, we could win acquittal. That is, we proved the rightness of Hosei struggle.

How University should be, how students should be? Hosei struggle is a confrontation between university administration promoting market principles and students who refuse to defense freedom of expression and academic independence. Freedom in university assures of lively discussion and new discovery, and it enables students to challenge their unbounded possibility.

Huge people have stood up all over the world and we can see young people including students at the forefront of those struggles. It is the matter of course and our right to refuse choky real and seek for new world. It is impermissible that the state power tries to “judge” such action in the name of the law.

We will go forward more than ever to realize complete acquittal, victory of Hosei struggle and crush of Neo-Liberalism.

The struggle of united students, workers, people and foreign friends brought us this acquittal. So we want to share the victory with you. Let’s stand up like Hosei struggle!
In addition, I’d like to tell you one more progress of our movement.

In the aftermath of this victory, on June 8th, our fellow students of Kyoto University realized re-building of All Students’ Autonomous Body (Dougaku-kai) for the first time in this 26years! They demand collective bargaining with the principle of the university to wipe out adhesion between the university administration and nuclear industry! 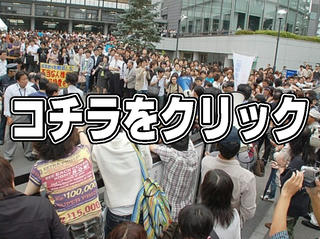